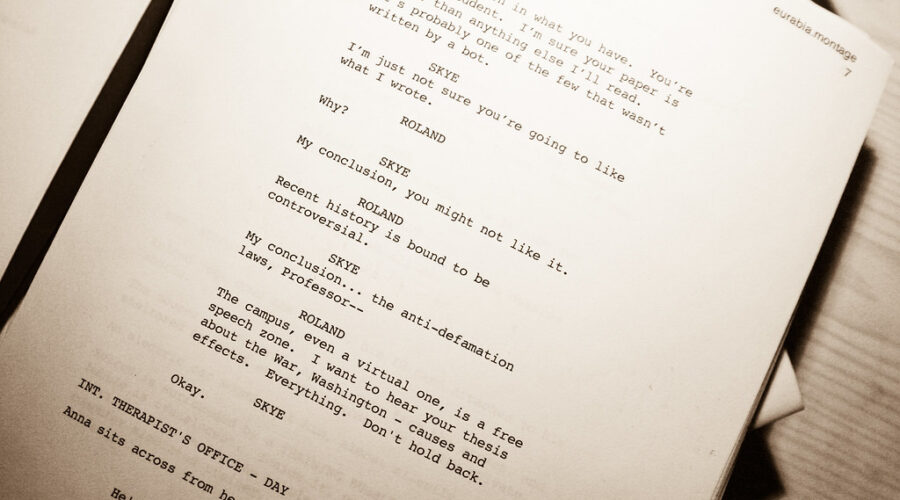 As a writer, one of the things I make sure to focus on for film credits is who wrote the movie, but these writing credits aren’t as clear as they may seem.

On IMDB I often see several different attributions for writers: ‘Screenplay by,’ ‘Screen Story by,’ ‘Adaptation by,’ ‘Written by’ and ‘Story by.’

I wrongfully assumed that story by was the person who scribbled the basic concept of the movie on a bar napkin, and spent the next day trying to figure out what the heck it was they wrote.

What ‘story by’ actually means is anyone that wrote some kind of screenplay outline or treatment for the movie, which are essentially extended synopses. What my brother and I write for this podcast come pretty close to being actual film treatments. We would get a story by credit if someone made one of our movies.

According to the writers guild of America, even if our entire screenplay is thrown out by the next writer, we are entitled to no less than a shared story credit. They may never use one bit of our idea, but because it started with us, our names will always have that association. This is called the Irreducible Story Minimum, and if we do this show long enough, don’t be surprised if you see the Sully Brothers earning a few story by credits on our now fictional retake pitches.

Screen Story by is closer to the napkin scenario, where one writer gave others some springboard concepts to the overall screenplay. This designation is limited to two writers. Written by is for those entitled to both story by and screenplay by credit.

Screenplay by is reserved for writers whose material is included in the final version of the movie, and also limited to two. The caveat here is if writing teams are involved, and in identifying writing teams is where things gets very specific. If the word ‘and’ joins two or more writers’ names it means they were individuals working separately on the project. If the ampersand symbol is used, it indicates an actual team of writers.

There was a time when I didn’t consider anything more than who starred in a movie. Then I began paying attention to directors, producers, and only recently delving into the writers of movies. If you love something, like we love movies, then you want to know every detail of how it goes from concept to final cut. If you make a list of your favorite movies, at some point you’ll see an overlap in the creative talent involved.

Featured image: “Eurabia sample” by Joe in DC is licensed under CC BY-ND 2.0